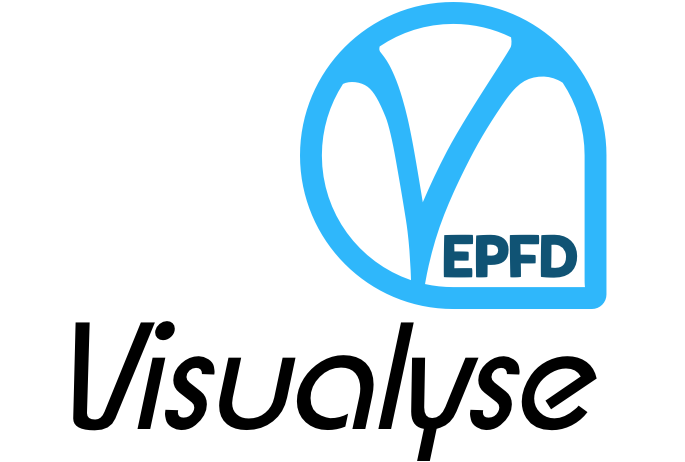 The algorithm to determine whether these limits are met is specified in Recommendation ITU-R S.1503 which uses as input parameters data provided in the non-GSO network’s filing such as the Power Flux Density (PFD) or Equivalent Isotropic Radiated Power (EIRP) masks.

EPFD stands for the Equivalent Power Flux Density, and is defined in Article 22.5C.1 of the Radio Regulations. At first sight this equation looks daunting, but at its core it is relatively straight-forward and builds on the concept of the power flux density or PFD.

The PFD can be calculated from a transmitter’s EIRP as follows:

It can be seen to represent the power density of the radio signal as it passes through a square unit of distance (typically metres) at a distance d from the transmitter. As the EIRP could vary depending upon the direction (for example if the transmitter didn't use an isotropic antenna), the term depends upon angle, here identified using θ.

The idea of the EPFD is that in many cases the victim receiver has a directional antenna and so the impact of PFD on its performance will depend upon the relative gain towards the interfering station. Hence:

Now the EIRP in Watts can be calculated from the transmit power P in dBW and transmit gain as follows:

The final stage is to note that the EPFD is an aggregate term and so must be summed over all contributing transmitting stations.

The result is the equation that defines EPFD in Article 22.5C.1 of the Radio Regulations:

Note that this is in effect a measure of the level of interference at the victim receiver.

The history of EPFD is linked to the development of non-GSO fixed satellite service (FSS) satellite networks in the 1990s, in particular the SkyBridge system shown in the figure below: 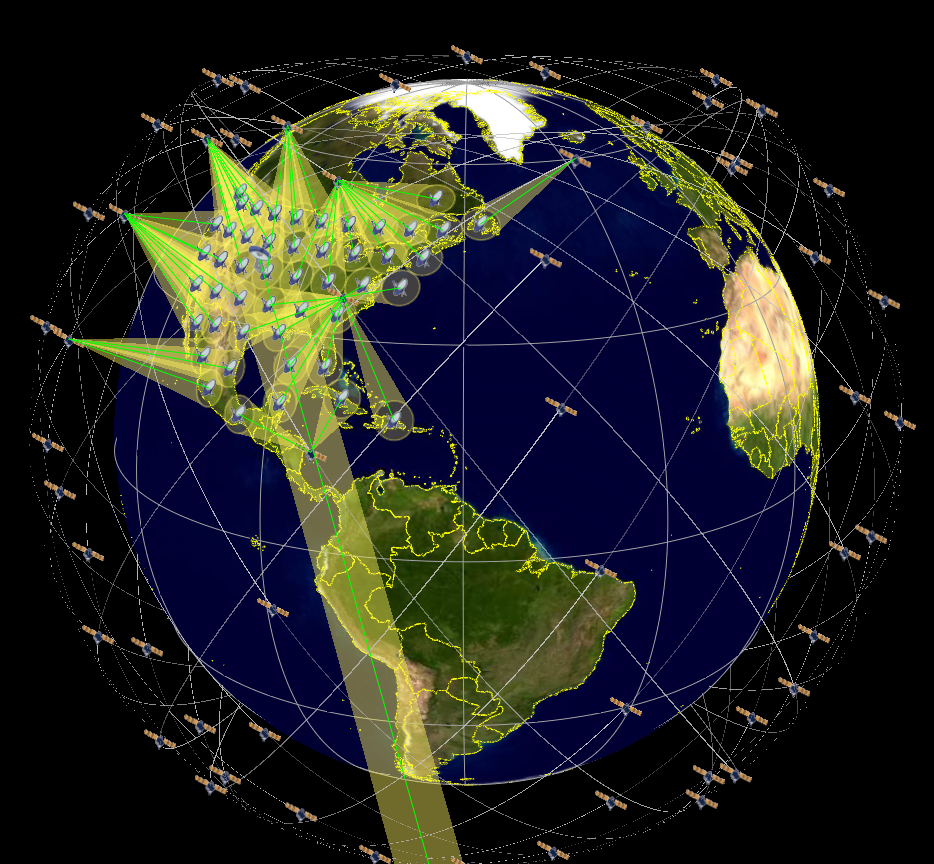 SkyBridge was proposed during the 1990s as an 80 satellite constellation operating in low earth orbit (LEO). It would have provided broadband data services on a near global basis.

It proposed to use parts of Ku band already widely used by GSO satellites. The 1995 Radio Regulations (RR) Article 22.2 included an obligation for non-GSO space stations to “cease or reduce to a negligible level their emissions … whenever there is unacceptable interference” to GSO satellite systems.

This caused two problems for the non-GSO operator, namely:

There was a consequential concern to the GSO operators:

EPFD was the solution to these three questions:

It should be noted that there are different types of EPFD which provide different levels of protection. Firstly there are a number of different interference paths that need to be considered:

In Article 22 of the RR there are, therefore, three sets of EPFD “hard limits” which the non-GSO system might have to meet, depending upon the frequency band(s) used. 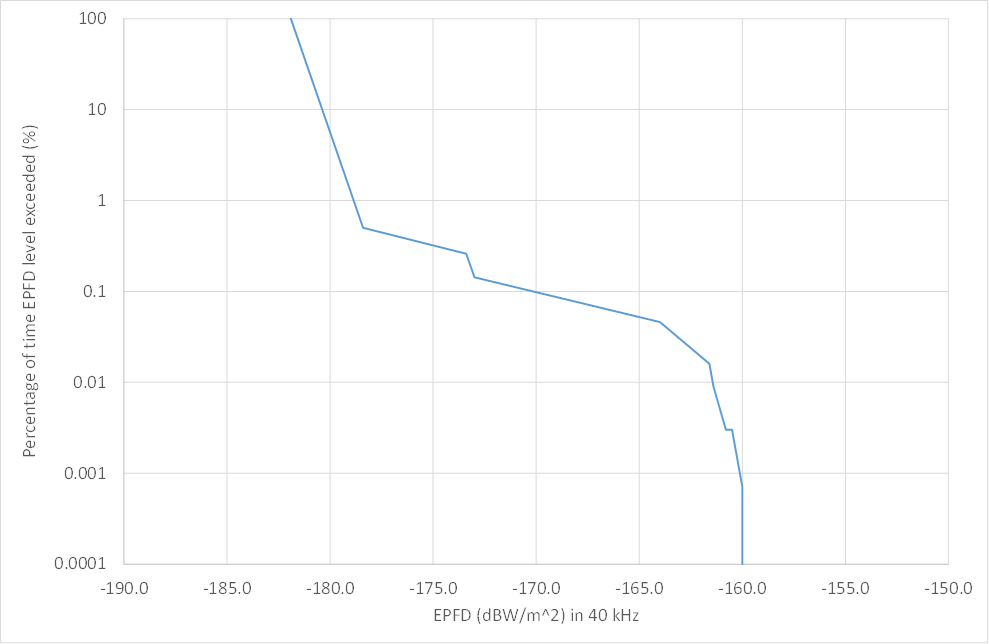 These EPFD levels are to be calculated using simulation (as discussed in the following section) and compared against the hard limits in Article 22.

Note that there are also addition “operational EPFD” limits which are those that would be measured by an active non-GSO FSS network, but these are not considered further in this document.

As well as the hard limits in Article 22, Appendix 5 also identifies situations where EPFD is used as a trigger for coordination under Articles 9.7A and 9.7B.

The conditions for Ku band at or below 12.75 GHz (and in brackets for frequencies above) are:

These are what are called the “Large Earth Stations” or LESs.

If these conditions are met then there are additional EPFD limits to check against. For Ku band at or below 12.75 GHz they are:

Both limits are for 100% of time and, as noted earlier, are coordination triggers rather than hard limits.

Article 22 of the Radio Regulations defines hard limits that non-GSO FSS networks must meet – and which the ITU Radiocommunication’s Bureau (BR) must check – but how are they to do that?

The answer is the algorithm specified by Recommendation ITU-R S.1503: Functional description to be used in developing software tools for determining conformity of non-geostationary-satellite orbit fixed-satellite system networks with limits contained in Article 22 of the Radio Regulations

This document, mostly written by Transfinite consultants, defines how to calculate the EPFD levels that would be generated by a non-GSO network given parameters filled with the BR according to Appendix 4.

A key inputs are the power levels emitted by the non-GSO satellite and its earth stations, and the way these are defined depends upon the EPFD direction:

The reason for using masks is it permits the non-GSO to change their operational systems as long as they do not exceed the mask filled with the BR. In particular the use of the PFD mask for EPFD(down) simplifies the EPFD calculation to:

This PFD mask can be defined in a number ways, including:

Alpha angle and difference in longitude

Azimuth and elevation at the non-GSO satellite

The alpha angle is a key concept in Rec. S.1503 and it is defined as the minimum angle between:

By comparing the EPFD statistics calculated against the EPFD thresholds it is possible to get a pass/fail decision.

These blocks are shown in the figure below: 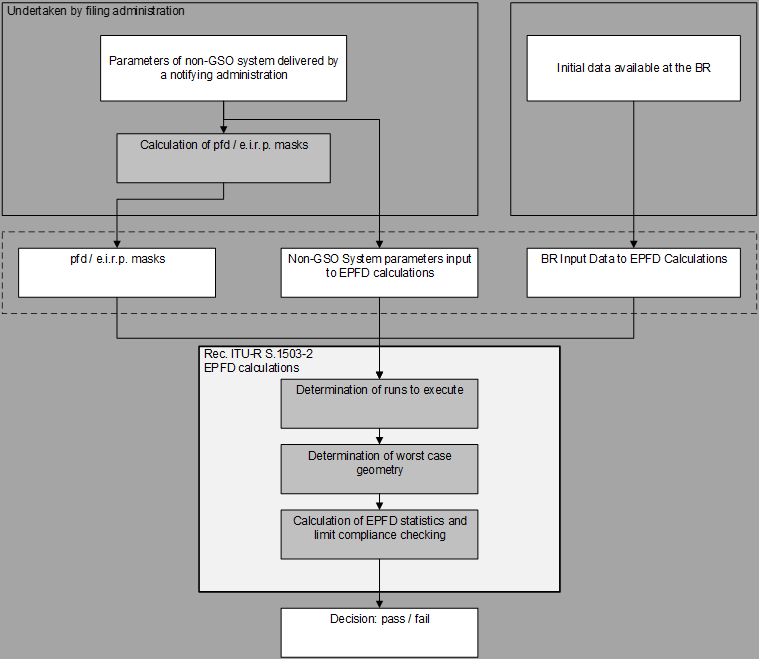 A key concept in the algorithm in Rec. S.1503 is to select the location of the GSO satellite and ES that is the “worst” case. Here worst is interpreted as giving the highest single entry EPFD or, if there are multiple locations with equally high single entry EPFD, the one that would have this EPFD value for the largest percentage of time.

This can be very complex to calculate given the wide range of possible inputs! It depends upon:

Typically it is necessary to search across the field of view of the non-GSO satellite, a task complicated by the use of the non-linear alpha angle as shown in the figure below: 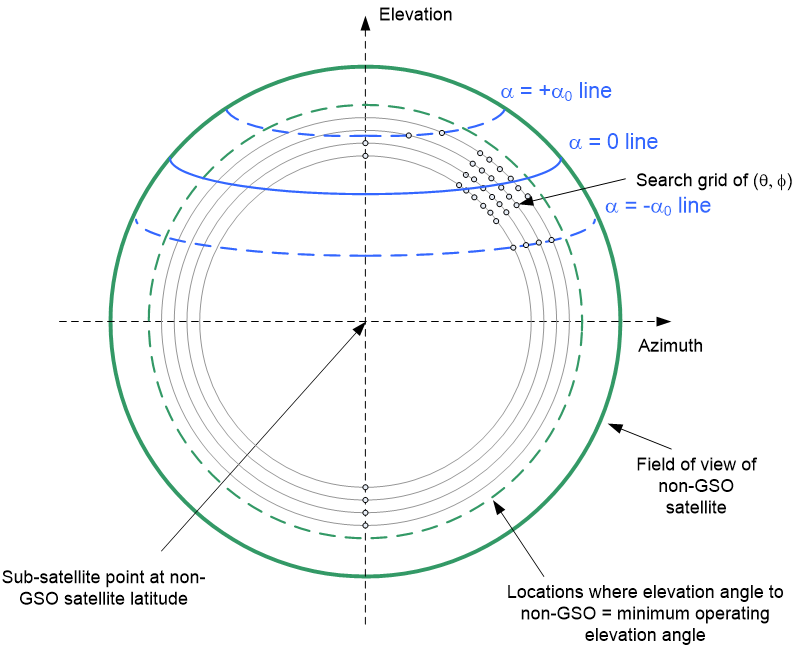 In order for the ITU BR to have available software tools that implement the algorithm in Rec. S.1503-2, it issued two parallel contracts to Transfinite and Agenium.

Work started in July 2015 with delivery to the BR of tested software at the end of April 2016.

A set of test constellations were constructed that covered the different types of non-GSO system that could be envisaged, such as circular or elliptical, repeating or non-repeating, equatorial or inclined etc.

Testing included hundreds of runs and billions of time step with the largest error spotted under 0.05 dB. Over all the test cases there was very good agreement.

We have been using EPFD as a metric in our main simulation study tool, Visualyse Professional, for many years prior to the inclusion of EPFD in the Radio Regulations. Many of the studies of the SkyBridge system in the 1990s were undertaken using our software products.

But the algorithm in Recommendation ITU-R S.1503 is highly specialised and in particular the user interface requirements are very different.

Visualyse Professional is what we call a “Study Tool” – you can ask “what if?” questions and see what the outcome would be, undertaking sharing studies between a very wide range of service types. This means that the user interface has been designed for flexibility, allowing almost any input parameter to be modified.

However analysis under Rec. ITU-R S.1503-2 is in principle a lot simpler because:

We therefore decided to develop a tool that specifically implements the algorithm in Rec. ITU-R S.1503-2, and that product is called Visualyse EPFD.

The input is a selection of the network to analyse as shown in the figure below: 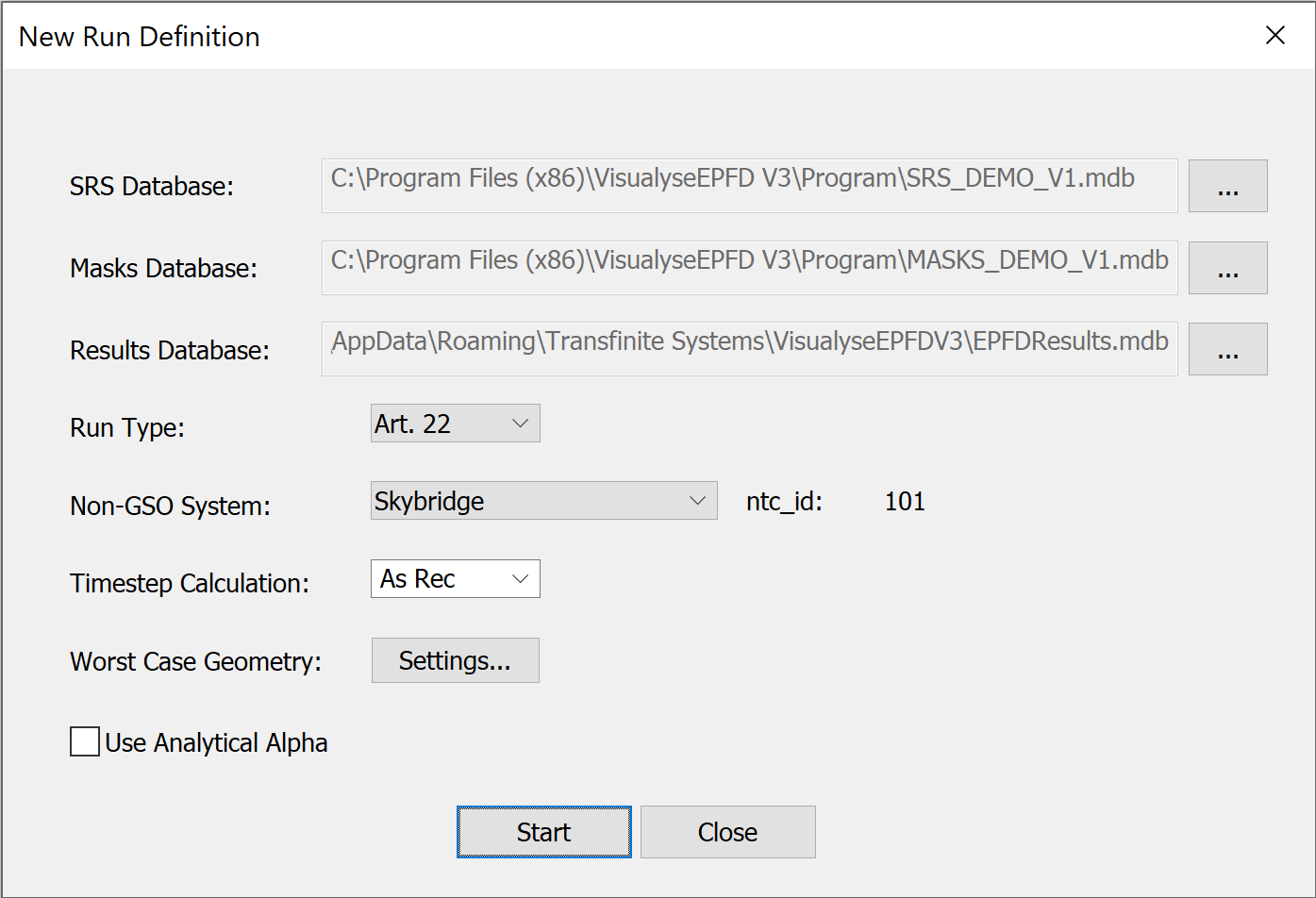 From this Visualyse EPFD queries the thresholds in Article 22 of the RR to develop the runs required as in the list below: 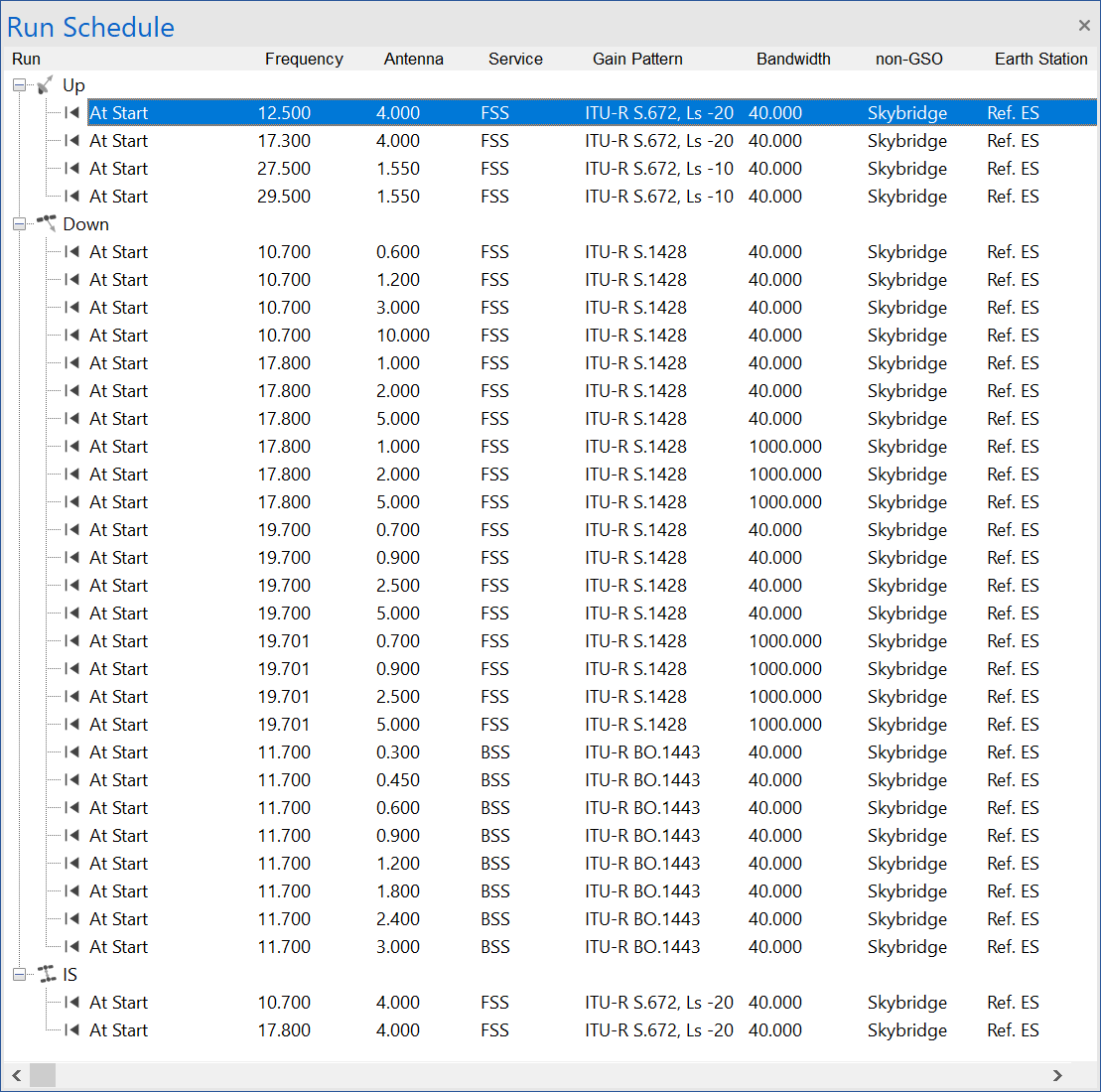 The software includes a graphical user interface (GUI) that shows the location of each of the satellites and gives feedback as to the intermediate values of the EPFD calculation:

How we can help

We are world experts on EPFD and the verification of non-GSO networks against the limits in Article 22 of the Radio Regulations.

Our Visualyse EPFD software is the leading implementation of the algorithm in Rec. ITU-R S.1503. It has been verified during testing with the ITU BR and can calculate:

It is available in two versions, one the ITU’s “black-box” for pass/fail decisions and the other a product with graphical user interface that provides feedback on the calculation process and allows additional options to be modified. 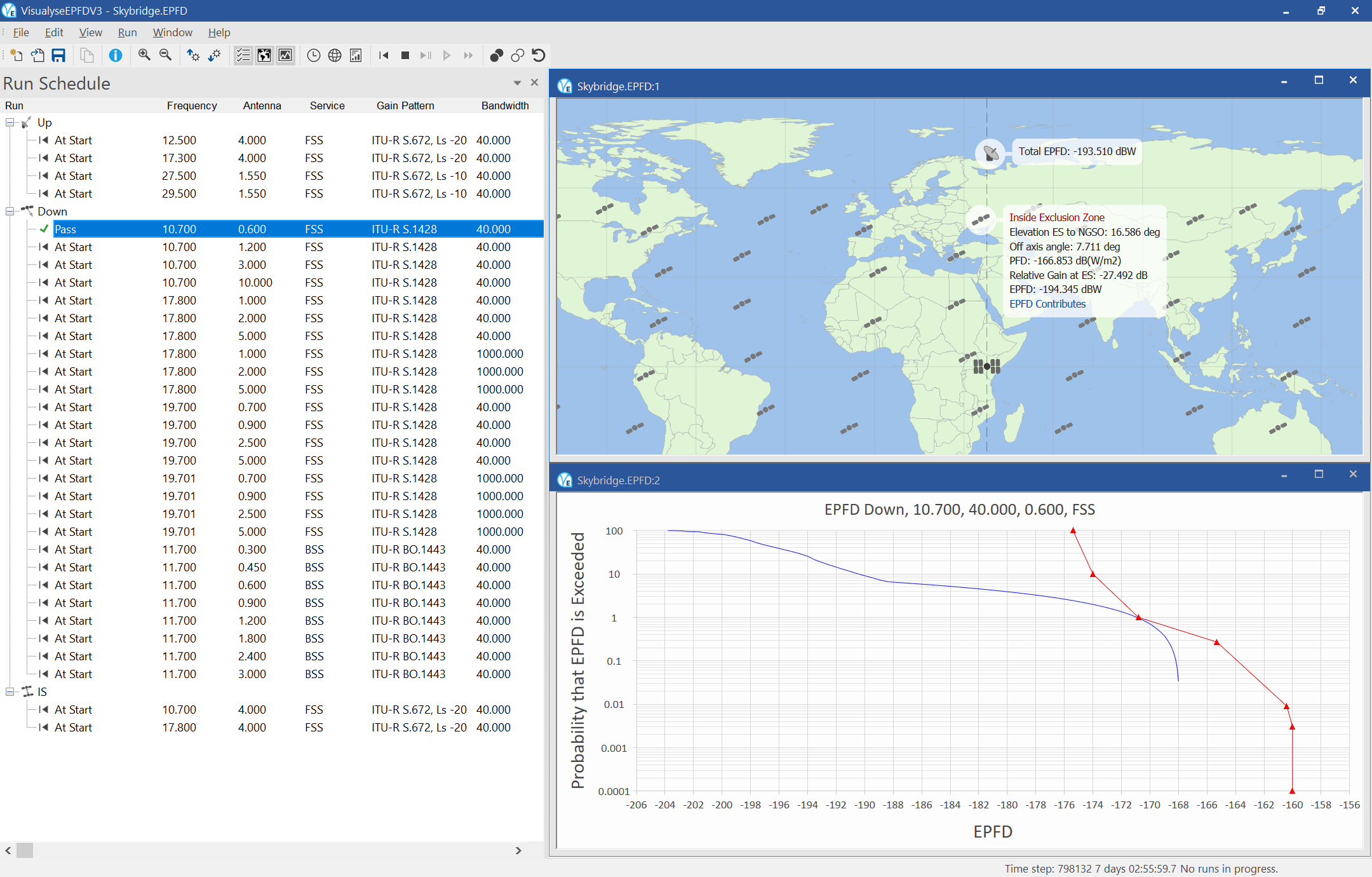 Our desktop study tool Visualyse Professional V7 can be used to analyse radio systems including both GSO and non-GSO networks.

This can model actual operation and include all the three EPFD cases of up, down and intersatellite. It could, for example, be used during the coordination triggered by Article 9.7A and 9.7B of the RR. 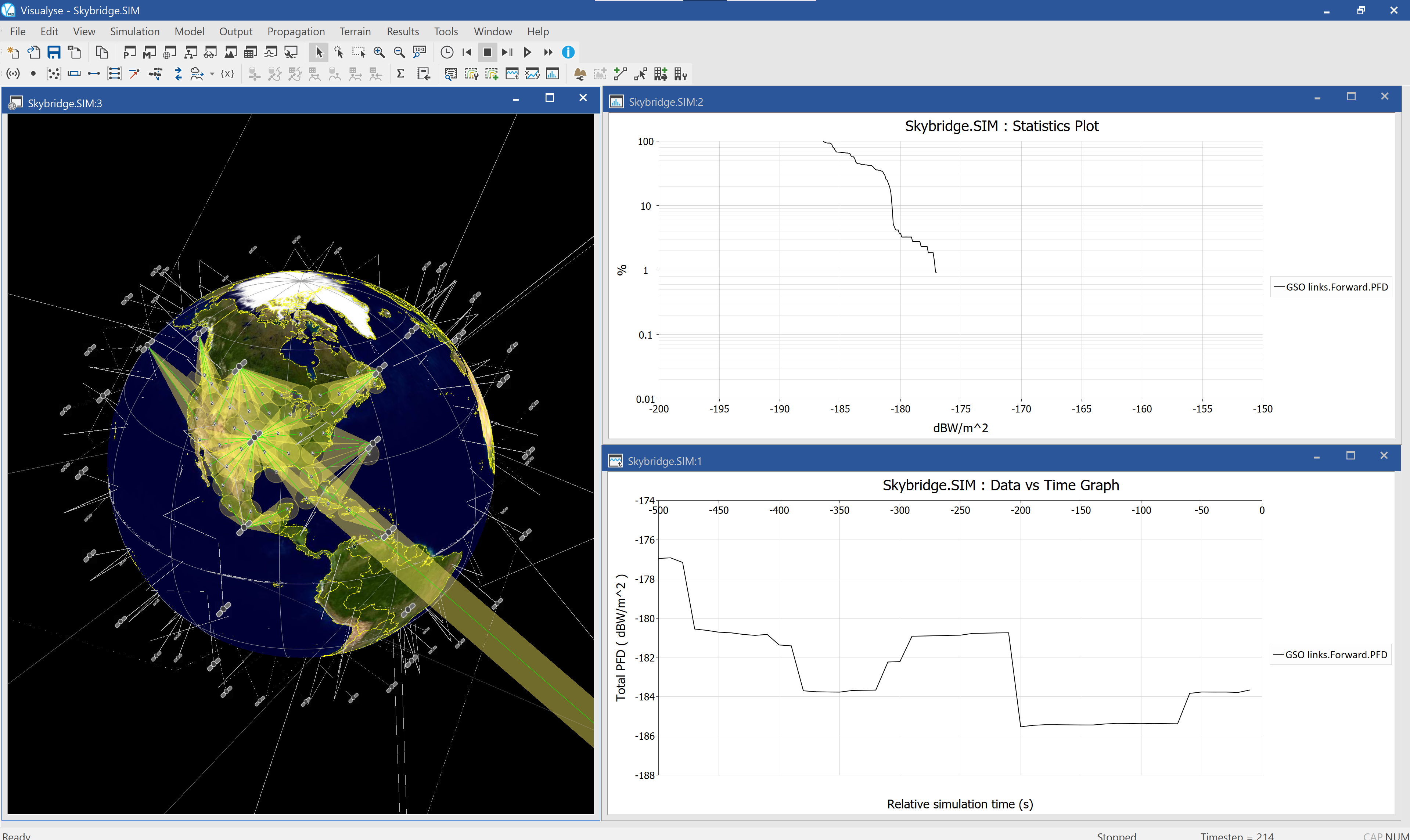 We have developed Visualyse GSO to support satellite coordination tasks. It includes IFIC/SRS checking, detailed C/I calculations. It can be also used to identify coordination requirements of non-GSO satellites.